A Different Path to the Boardroom: Female Leadership in the Middle East 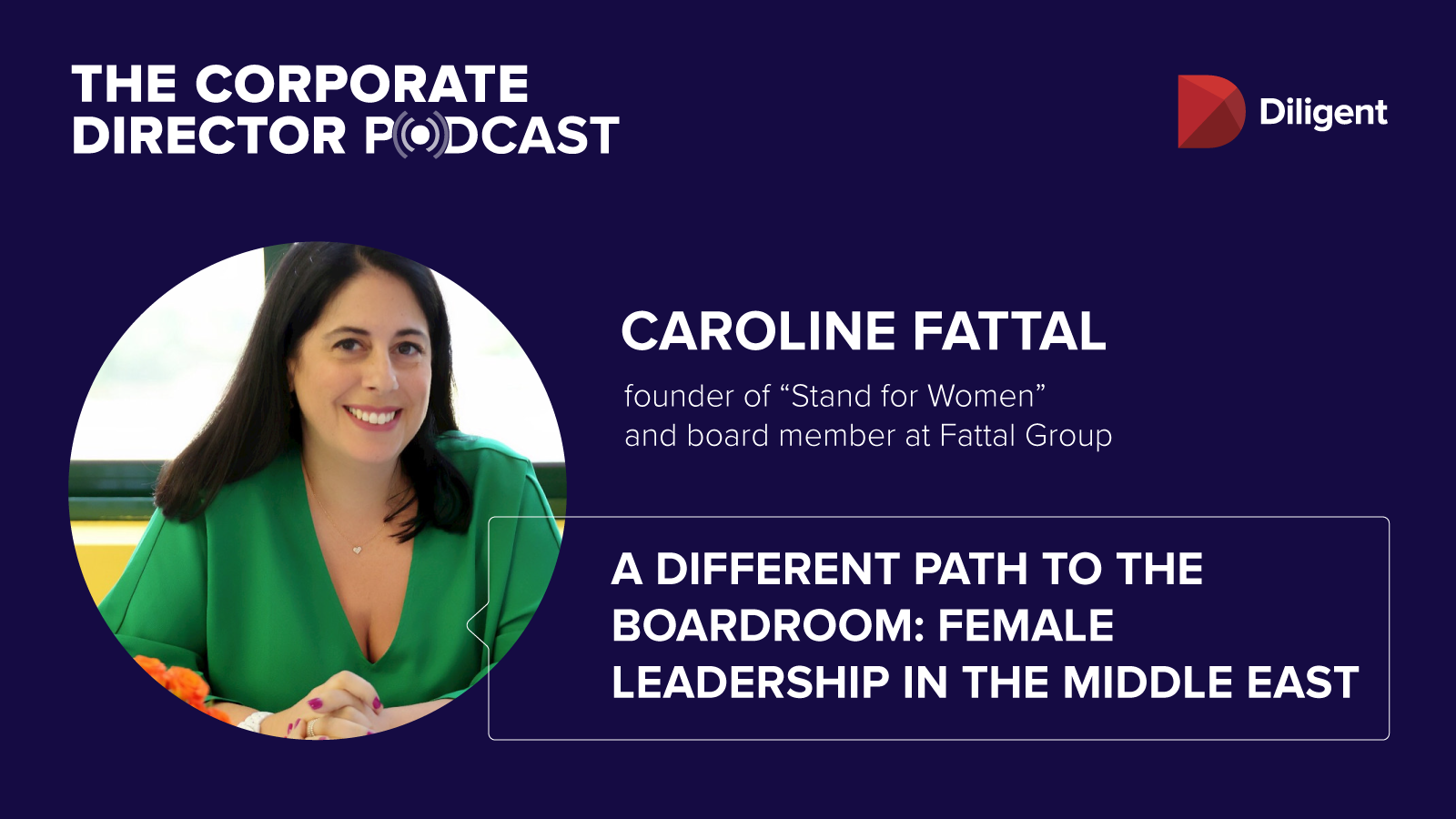 Listen to Episode 60 on Apple Podcasts

Guest: Caroline Fattal, founder of “Stand for Women” and board member at Fattal Group

Across the globe, women face very different barriers to entry in corporate leadership. What does the gender diversity conversation look like in the Middle East, and how has that conversation been developing over the last few years? In this episode, Caroline Fattal discusses her unusual journey to the boardroom in the Middle East and her work to empower other women in leadership roles in the region.

One Woman’s Path to the Boardroom

Fattal begins by explaining her career background and how she ended up on a board: “I studied in France due to the Lebanese war. After that, I worked in Argentina as a sales and marketing executive.” From there, she worked at Unilever in their operations department back in Lebanon: “After eight years of experience, I joined the family business. Due to an unexpected opening, I entered the boardroom after working there for several years.”

Suddenly, Fattal found herself as the first woman and youngest person to join the board at her family’s company in 100 years. She reflects on this experience: “It was not easy for me; I want to tell the truth. When I joined, I was physically sick before every board meeting because I never stopped questioning and doubting myself. I wondered: will I have the right points? I was stressed about being worthy and perfect.”

Eventually though, Fattal was able to find her confidence and turn that to success: “We had a company in Iraq, and we decided to separate the management from the boardroom. I decided to step in with a special committee to fix the problem. Despite the invasion of ISIS, we managed to fix the operational concerns. This taught us that in terms of governance, it’s better to have management and the board have separate roles.”

Gender Diversity in the Middle East

Fattal zooms out and gives a rundown of the current gender diversity picture in Middle Eastern corporations. She first covers recent legislation and pressures: “The UAE recently passed a law asking for listed companies to include women on their boards. The application has not been fast or efficient, but it is a step. The same has happened in Egypt, ensuring this issue is now on the agenda of advanced companies. The Lebanese League for Women Businesses advocate for this as well and has asked companies to sign pledges promising that their boards will be 30% female by 2030.”

She discusses the importance of gender diversity: “Women bring risk awareness. I like to say that we are not risk averse, we are risk aware. Women are often able to bring transformational leadership: for many of us, it’s more about listening and about making sure every voice is heard. These are added values, and it’s not only about gender diversity, it’s about diversity at large.”

“If you fail to bring women into the boardroom, you’re lacking the voice of half your consumer population. Women are decision-makers, and companies across the globe have to realize this.”

–Caroline Fattal,founder of “Stand for Women” and board member at Fattal Group

According to Fattal, culture and societal context play a large role: “We live in a very patriarchal society, where stigma and stereotypes still harm both men and women. In my generation and my parents’, women were accessing the board and senior positions only if they were widows or embroiled in other uncommon circumstances.” She explains why this is: “People often believe there are not enough ready and able women in the region to succeed in boardroom. This, clearly, is a myth: there are plenty of capable women and plenty of organizations to help you find them.”

A Word to the Wise

How was Fattal able to overcome her initial anxiety as the first woman on her board? For her, it was all about building confidence through competence: “I gained confidence after getting board board certifications. I had a general and intuitive understanding of the role and responsibilities.” Overtime, this resulted in huge success: “I started to detach myself from the anxiety, and that meant that I was more fluent in the issues. Today, I’m seen today as the one who is always challenging the status quo. I make sure we’ve thought of all the angles.”

Mentorship was also an important step in Fattal’s personal and professional journey: “I had the chance to be an executive coach with Peninah Thompson. She introduced me to gender diversity statistics, and helped me to realize the unfairness of women being kept out of positions of power and influence.” She goes on: “That’s when I decided to create my organization Stand for Women. I wanted it to be built on economic empowerment and sisterhood. I wanted to show that women’s circles can be supportive; to challenge the pervasive stereotype that women don’t want to see each other succeed.”

“As I progressed in my career, I realized that I shouldn’t have to be the only woman in the room anymore.”

–Caroline Fattal,founder of “Stand for Women” and board member at Fattal Group

Fattal then gives her advice to other women seeking board positions: “Be authentic and talk about yourself, loudly, so you can get noticed. Competence at the senior level is not enough, you also need influence.” She also has some tips for women who have just landed their first seat: “When you reach the boardroom, get certifications. They gave me a technical and tangible confidence. Make sure you come prepared so you can feel on top of things. You have to believe you and those around you can all add value in different ways.”

For organizations looking to increase diversity and add value to their boards, Fattal insists, “Onboarding is so important. Make sure the person coming into the boardroom fully understands the company, its goals and the environment in which it operates. During the meetings themselves, the role of the chair is crucial for inclusion. You have to be able to advocate for other voices if one person is dominating the conversation.”

Fattal highlights her work with female business owners in Beirut following the devastating 2020 explosion. The explosion, which killed over two hundred people including Fattal’s aunt, depressed economic activity in a region already on the brink of economic collapse where female business owners in particular already struggled. Through her work over the last year, Fattal has been able to help over 140 female-led SMEs recover from the blast.