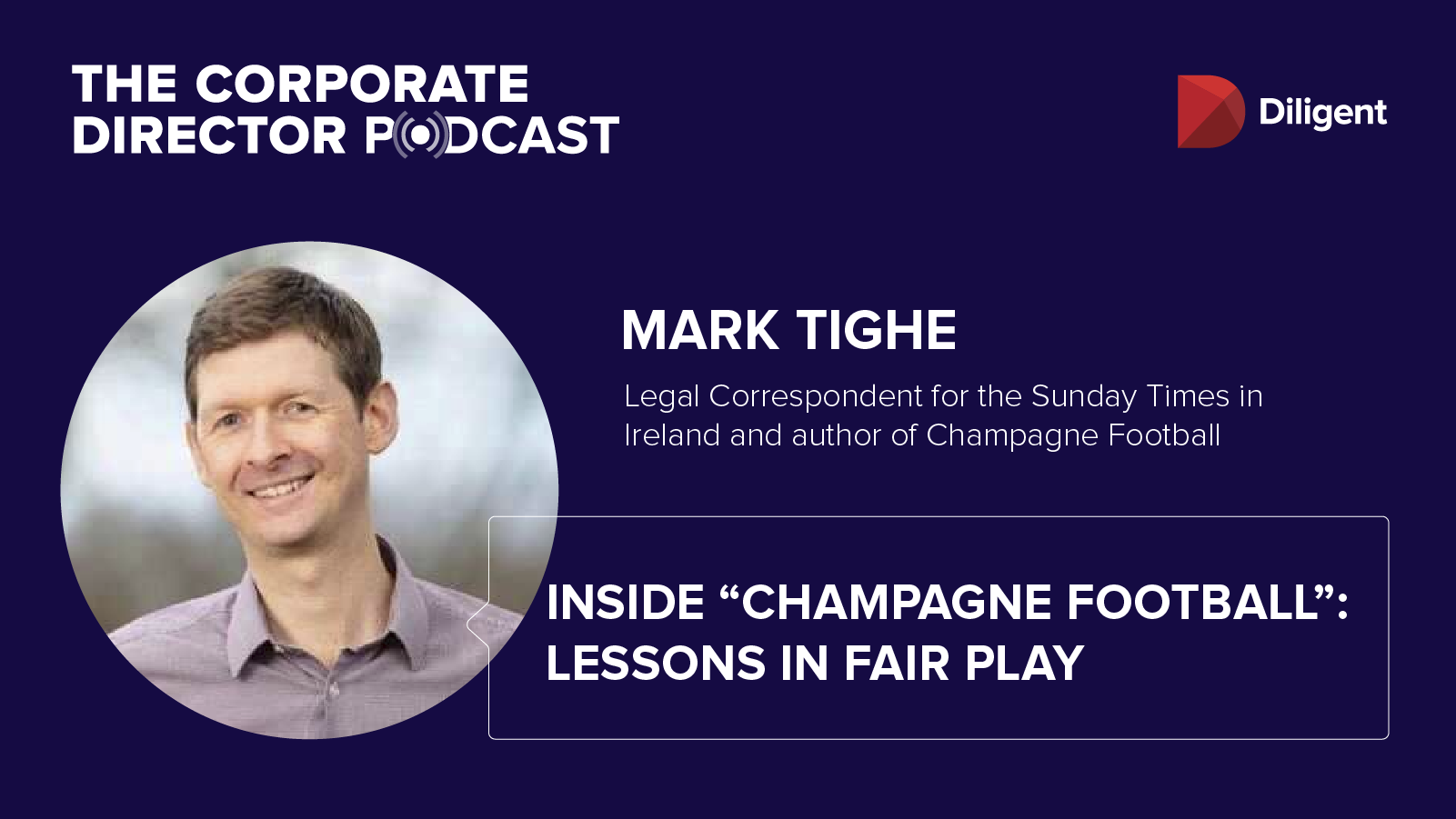 Listen to Episode 58 on Apple Podcasts

Guest: Mark Tighe, Legal Correspondent for the Sunday Times in Ireland and author of Champagne Football: The Rise and Fall of John Delaney and the Football Association of Ireland

What can corporate governance failings teach us as we move forward? Author Mark Tighe takes us inside his best-selling book, Champagne Football: The Rise and Fall of John Delaney and the Football Association of Ireland, a story of corruption, groupthink, and the cult of celebrity that rocked the Irish football and governance communities in equal measure.

Tighe first tells us how John Delaney’s reign within the FAI piqued his interest: “It started off as a personal interest. So much of journalism is following your passions. I went into news reporting as opposed to sports reporting, but I never stopped following football. I’m an avid fan.”

He then told us about how his interest in football culminated in him seeing Delaney at several matches: “I’ve seen John Delaney interact with fans at championships. They bowed down to him and lifted him up on their shoulders. Such lavish displays of affection from fans always bothered me a bit, especially considering we lost the three games I saw in the championship.”

Eventually, Delaney’s prominence rose to the point where Tighe was asked to write a personal profile on him in 2017: “Through my reporting on the news side of things on football that we got a tip off in 2019 anonymous envelope on my desk that got the ball rolling into a blockbuster investigation.”

Tighe then discusses some of the red flags Delaney displayed, which were overlooked and tolerated by those around him, including the board: “Journalists often weren’t allowed to ask questions at AGMs. Instead of people using the opportunity as representatives to ask questions of John Delaney at these meetings, they were just heaping praise on him as the best CEO the FAI has ever had.”

And when anyone, media or otherwise, took aim at Delaney, they were quickly shut down: “When a rival paper called him Kim John Delaney as a joke, they had to apologize and pay legal costs. That reinforced to me that not only was he not being transparent, he was using the laws in Ireland to silence even mild critiques. These were red flags to me as a journalist.”

A Culture of Secrecy, Fear, and Loyalty

Delaney was able to cultivate a cult of personality firstly through his pedigree as a man with deep roots in Irish football: “His father, Joe Delaney, was the treasurer before him. There was an FAI governance scandal in the 1990s, and Joe Delaney ended up repaying a significant portion of the ensuing debt out of his personal bank account. People admired that and thought he had been mistreated,” Tighe explains.

Once he became the CEO of the FAI, Delaney never stopped politicking. Tighe notes, “He would go around to small football clubs all over Ireland amassing support. He had people make him briefing documents on these clubs, so that the owners felt seen by him. That personal connection, however contrived, along with the media attention brought to the club when he visited, inspired loyalty. He’d also sort people out for tickets, give out his number and email at matches, anything to get another person on his side.”

By the peak of his power, Delaney had surrounded himself with fiercely loyal supporters and colleagues. Tighe explains how this then allowed for him to engage in corrupt practices: “In many cases, it comes down to loyalty. Supporters, board members, staff members, loyalty is put higher than any other trait. When people ask questions, it’s seen as embarrassing and disloyal. Anyone who did ask questions were pushed aside and seen as a harm to the organization’s success.”

Delaney then tried to build a new stadium during the financial collapse in 2008 and 2009. To pay for the stadium, he was selling ticket packages for outrageous prices: “Experienced businessmen and public servants raised questions, but John Delaney brushed it off and his board supported him.” Part of this was fueled by a structural problem, says Tighe: “Instead of the CEO being answerable to the board, there was this crazy but common situation where Delaney was also a member of the board, so nobody could really discuss their misgivings without him in the room.” This only reinforced a deep fear of speaking out against Delaney.

Where were the auditors? According to Tighe, they were being bullied by Delaney as well: “Deloitte audited the FAI for twenty four years, which had put them in a relationship that was far too lax. When auditors questioned the ticket prices and revenues, we found replies from Delaney where he even said to them, ‘How dare you ask that question.’” Auditors then insisted they had been misled.

“The culture of secrecy and fear was definitely there. For Delaney’s board members, staff, and supporters, loyalty was considered more important than any other trait. Anyone who questioned his practices or spoke out against him was viewed as disloyal and wrong.”

–Mark Tighe, Legal Correspondent for the Sunday Times in Ireland and author of Champagne Football: The Rise and Fall of John Delaney and the Football Association of Ireland

The State of Reform

Tighe explains that aspects of Delaney’s corrupt practices illustrate the importance of boardroom diversity, and an open embrace of alternate views, particularly in Ireland were women rank last in the EU in of boardroom gender diversity: “In 2018, the first ever female director came into the FAI. She tried to enact basic practices like the board getting briefing documents in advance of meetings, so that they could come prepared for discussion. John Delaney told her that wasn’t allowed because of potential media leaks. John Delaney stopped directors from doing their job, and she wasn’t getting backing from her fellow directors. She tried to reign him in, but it was just her fighting the battle alone. Having a range of perspectives is so important.”

Tighe believes that we still need greater transparency and accountability in corporate governance to enact real and lasting change: “Public funds should be open to freedom of information legislation.” He also cites a serious culture problem when it comes to corrupt and illegal governance practices: “In Ireland, people often like the rogues and those who cut corners to get ahead. We need proper white collar crime laws, we need to back regulators with proper resources, and need to ensure that politicians and other public figures aren’t endorsing and continuing to praise people who have not done the right thing.” His prediction: “I think that if we can do that, we will have a trickledown effect, but there’s no silver bullet.

“There’s clearly more work to be done on bringing our auditing up to international standards. There are plans for reform, but the groups leading this movement are still vastly under resourced.”

–Mark Tighe, Legal Correspondent for the Sunday Times in Ireland and author of Champagne Football: The Rise and Fall of John Delaney and the Football Association of Ireland

On a lighter note, Tighe gives his prediction for the future fortunes of Irish football: “There are definitely green shoots. Under Delaney, we went for the quick fixes, and signing good players for lots of money. I’m hopeful considering this new concentration on the league of Ireland as being the bottom of the pyramid so to speak, and the conveyer belt of talent. We need to focus on developing good players in the country from the ground up, and really going back to fundamentals.”