Tips on Diversity from a Digital Leader 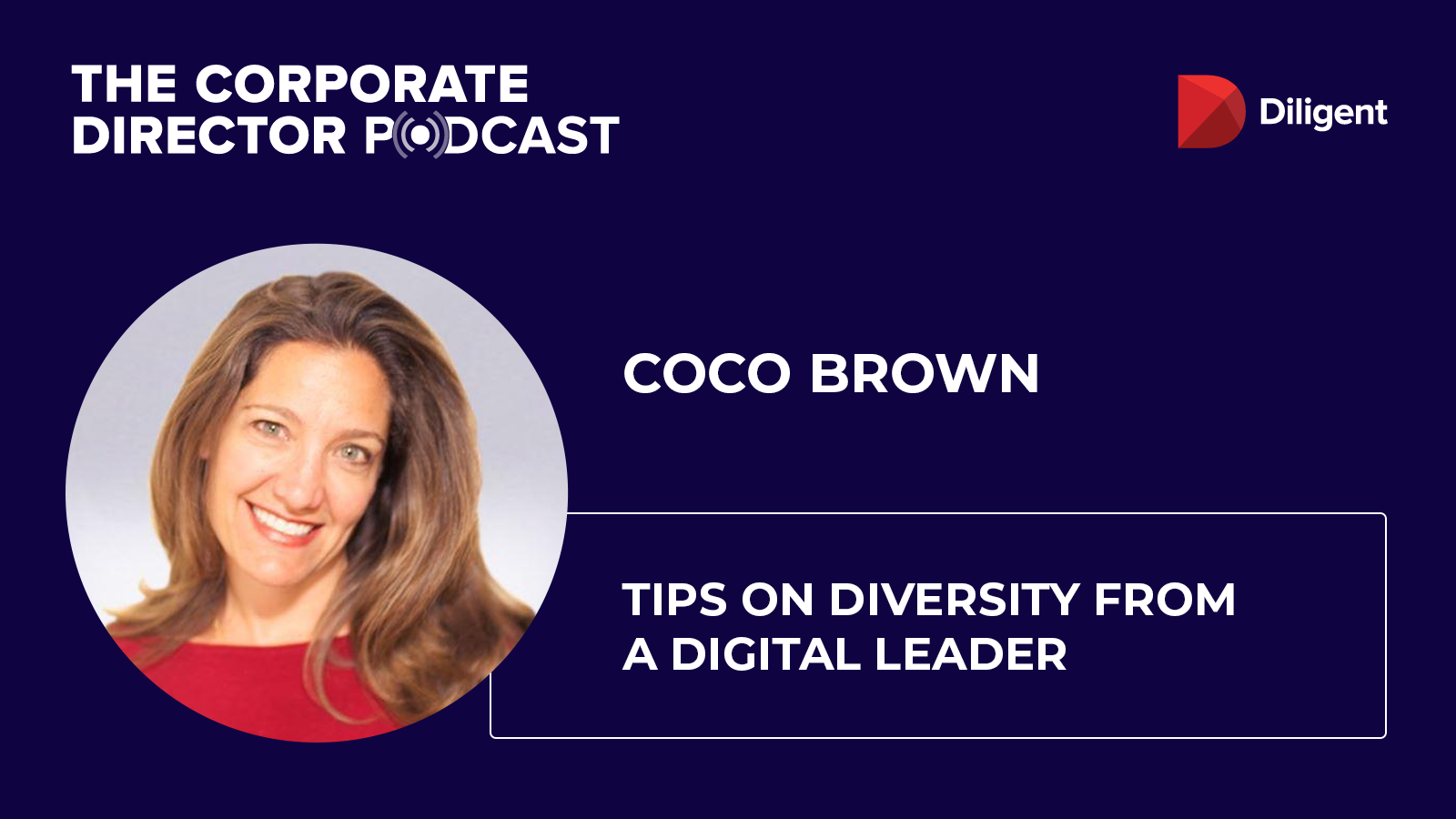 Listen to Episode 39 on Apple Podcasts

“The average board tenure is 9.2 years; the average American marriage is 8.5 years. We are more willing to get divorced than we are to change our boards.”

What does it take to move the needle on board diversity—and help first-time board members truly have a voice in the board room?

The Athena Alliance is a digital ecosystem and platform designed around community, learning, and access to opportunity for women in business. Brown founded the organization after serving as president, COO, and board director for Taos, a professional and managed services provider for companies including Apple, Cisco, eBay, Facebook, and Silicon Valley Bank. She also currently serves on the board of ArcherPoint an IT professional services company based in Minneapolis.

In this episode, Brown shares her reflections about candidate pipelines, recruitment, and ways first-time board members who are “only’s” (e.g., the only woman, the only person of color) can find their voice and fully contribute.

Board recruitment doesn’t always have to happen in person

According to Brown, the Athena Alliance’s digital approach encounteredearly resistance from both men and women, under the argument that building a more diverse pipeline was a problem that could only be solved locally and within four walls.

Yet a digital platform actually widens the net.

Brown explains that the pipeline for female candidates appears small when you look at statistics for specific companies, specific regions and in certain positions—for example CEOs and investors. But when you extend your search intothe digital realm, this picture changes.

“Just in the United States alone, there are 600,000 women who are at the VP rank and above in companies with over 500 employees, Brown says. “So that’s actually a lot of women.”

Furthermore, digital platforms and networks like the Athena Alliance give womenthe opportunity to make themselves known beyond their board bios—for instance, throughthought leadership andpeer networking.

For example, a candidate may meet two of the five criteria posted for an open board position. With a traditional recruitment approach, the board might not give this candidate a second look.By contrast, a digital platform and network like the Athena Alliance gives the board a chance to know more about the candidate’s other skills and qualifications—and discover she might be the perfect fit after all.

“We’ve been building our thesis, model, and engagement with the world around access—and driving access through a different solution than the usual handshakes that people make in person.”

Brown says she wondered this herself—then she started asking women of colorshe knew for potential board candidates.“All of a sudden I discovered there are lots and lots of women of color out there ready to serve on boards. I only had to ask.”

In fact, Brown says, the Athena Alliancehas expanded its membership dramatically—adding more than 70 women of color to the organization—through this approach. “I’m not seeing any compromises here or lowering the bar, either,” she says. “I’m talking about the CTO of Microsoft U.S., a woman who runs a $3 billion business for IBM.”

“I feel like there will be seven or eight companies calling after this podcast asking for their names,” quipsSchindlinger.

“There are lots and lots of women of color out there ready to serve on boards. I only had to ask.”

How can board “only’s” best find their voice and add value?

Once women get into the board room, what are some of the ways they can ensure that their voice and contributions are really being heard, Schindlinger asks, especially if they’re the “only”—like the only woman in the room or the only person of color?

Brown cites the value of offline peer conversations. In salons hosted by the Athena Alliance, she says, “Women are coming together across different boards and saying ‘here’s what I’m trying to do’ and asking ‘what are you doing?’ “

As “only’s” wait for board composition to catch up and change their status, a comfort zone outside of the board room can give them strength.

“You probably could not have found a stronger reason for every woman executive who is thinking of serving on a board to join the Alliance,” says Schindlinger.

“Women should create strength outside the boardroom, so they have strength when they walk into the room.”

Brown talks about the Athena Alliance’s “origin story”from Silicon Valley dinner group to global force for board diversity and how women must “ignore the tags” when looking at the criteria for a board seat they’re interested in.

“It’s easy for us to go ‘I haven’t done that, I’m not from this certain background’ instead of turning it around and saying ‘how is what I do the right match for what they’re asking for?”

For example, a board opening might not specify “general counsel,” but someone in that role might have the right qualifications for what the board is looking for, like a deepunderstanding ofthe complexities related to M&A, integrations, new product expansions, and securities issues.

Listen to Episode 39 on Apple Podcasts

Resources in this episode