Breaking Through: One Director's Journey to the Boardroom and Updates from the LCDA 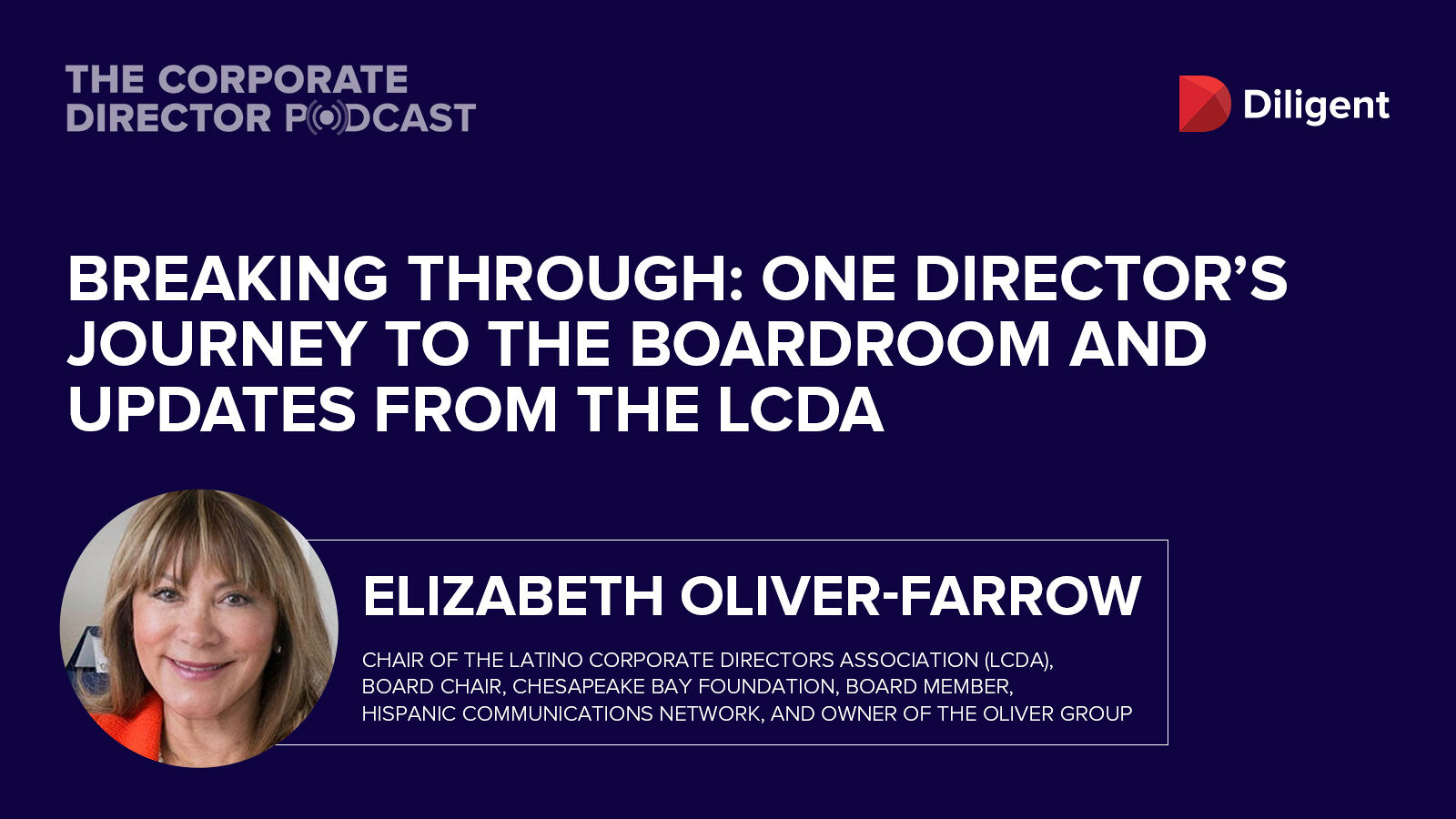 Breaking Through: One Director’s Journey to the Boardroom and Updates from the LCDA

Listen to Episode 83 on Apple Podcasts

Journey to the Boardroom

Oliver-Farrow begins with some background on her career: “I started my career in New York City in finance and then as a PR executive. In that role, I was responsible for marketing and advertising for clubs and casinos, in New York City and Atlantic City. Then, I launched my first firm in the city.”

She then moved to DC to start her family and to focus on issues she cared the most about: the environment and education. She explains, “Most of my clients were federal government agencies. I represented the Environmental Protection Agency, the Department of Transportation, Department of Defense and the National Institutes of Health, among others. I approached this same way I approached show business: through multicultural and bilingual campaigns. I always try to advocate for women and Hispanic business leaders.

Oliver-Farrow also worked under several administrations of the US Small Business National Advisory Council, which allowed her to grow her nonprofit and advocacy experience. She is also the owner of the Oliver Group, a public and government relations consulting firm. As a Director on the Hispanic Communications Network, Oliver-Farrow works with culture and data-driven social impact campaigns to improve the quality of life for US multicultural communities.

Oliver-Farrow then delves into how it felt to the first Latina on her board: “It’s not great being the first,” she says. “There were 27 members of the board. I was excited to serve on the board of a regional multibillion dollar health insurer. I was well-versed. I had taken a governance course at the Harvard Business School. I felt comfortable walking in with my knowledge.”

But as the first Latina, Oliver-Farrow was acutely aware that she had to prove my worth to the board and to the management team: “I felt that they were not doing adequate outreach to Hispanic communities. They were leaving money on the table. So, I started advocating. I told them that there were a lot of Latino businesses that we were not marketing to.”

After about 3 years, a senior VP in advertising told Oliver-Farrow that they were going to translate a brochure into Spanish, marking a moment of success. “By the time,” she says, “Our board was getting diverse, and I was able to convince them to develop a full-fledged marketing and advertising campaign to engage with that community. This developed and became successful to the point that we began to reach out to other underserved communities.”

Oliver-Farrow has some advice: “I worked for three years to introduce another qualified Latina to the boardroom. To other Latino directors who are the first or only Latinos on their board, when the seat opens up, don’t be shy. Have your board go to LCDA. We have terrific board-ready talent. Just like others make recommendations, you should also be making representations to bring more diversity onto the board. I worked to develop relationships in the boardroom, through LCDA, networking, dinners, so on.”

She adds, “To directors serving on a board, ask your CEO, management team, and fellow directors about Latino strategy. Are you servicing that market? Are you leaving money on the table? Do you have representation to help you make sure you’re tapping into that community? You need to be taking advantage of the entire market.”

Updates from the LCDA

Oliver-Farrow then discusses more of the offerings and insights from the LCDA, the only association made up of U.S. Latinos that serve on public and large private company boards. She states, “We are full of C-suite level and board-qualified executives. We are a membership community of corporate leaders committed to paying it forward, trying to increase the number and influence of Latinos on boards.”

Oliver-Farrow drills down into the numbers: “As of June 30th, 2021, only 3.1% of Fortune 1000 board seats were held by Latinos. Of that, Latinas are only 1.3%. Meanwhile, 69% of boards have no Latino directors, even though 2/10 Americans are Latino. We contribute 25% of the country’s GDP and are responsible for 85% of new entrants into the workforce. This has to change.”

LCDA has an education foundation to help prepare board-ready talent. Oliver-Farrow gives more detail, “There, we have the Board Ready Institute, which trains Latino C-suite executives. We’ve been placing those executives on boards at accelerated rates in the last year,” She adds, “U.S. boardrooms are dangerously disconnected from the multicultural marketplace. You have to reflect the fastest growing market in the country. At the bottom line, you’re leaving money on the table.”

Oliver-Farrow gives her prediction for the future of boardrooms: “I envision diverse and inclusive boardrooms including Latinos. Also, I believe that DEI and justice will not just be catchphrases, but an infused strategy across businesses and nonprofits in the US.”