ESOPs Fables: What Sets an ESOP Board Apart? 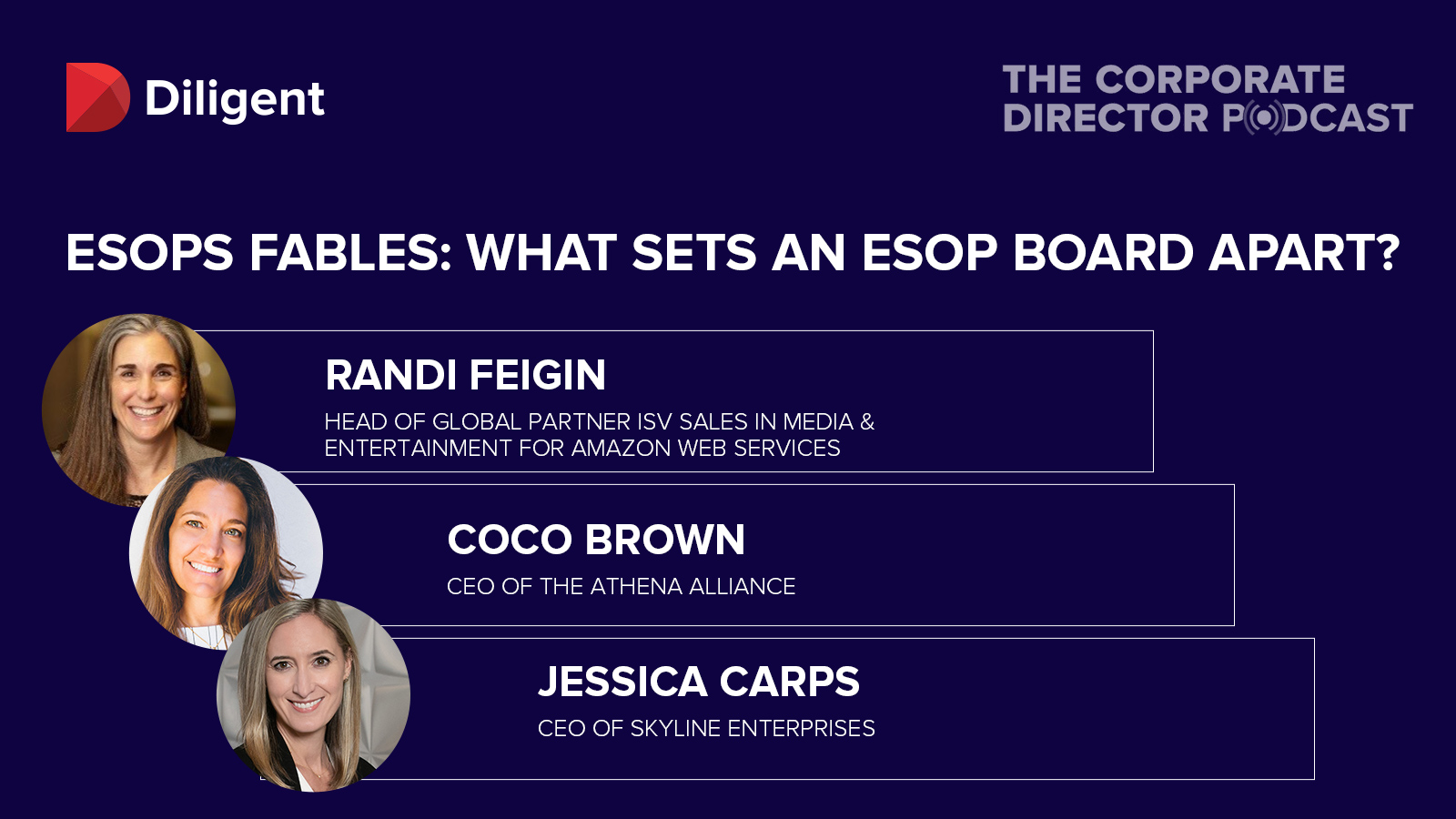 ESOPs Fables: What Sets an ESOP Board Apart?

Listen to Episode 85 on Apple Podcasts

In this episode of The Corporate Director Podcast, intrepid business leaders Coco Brown, CEO of the Athena Alliance, Randi Feigin, Head of Global Partner ISV Sales in Media & Entertainment for Amazon Web Services, and Jessica Carps, CEO of Skyline Enterprises, take us inside the world of ESOPs and discuss why the board of an ESOP can be a great fit for a new director.

What is an ESOP?

Carps begins by explaining ESOPs, which are not a structure a lot of people are familiar with: “It is a qualified retirement plan that allows employees to benefit from the profit of the organization. It is another way of building a sustainable and successful company over time.”

Essentially, says Carps, you can think about it like a type of 401(k) that only holds share of company stock. “But” she says, “The legal entity structure has many differences from 401(k)s. Essentially, a company is owned in whole or part by an ESOP trust. The employee gets cash benefits by selling those shares, and the company has a statutory obligation to rebuy those shares. Unlike a 401(k), where employee contributions are self-directed, in an ESOP situation, all employee contributions are directed by the plan document, which is managed by the board. This is very important from the board perspective.”

Feigin then lays out the differences in board service between nonprofit, public, private and ESOP boards: “On nonprofit boards, in most cases you are a volunteer, and you don’t get compensation in cash or stock. There is a high degree of commitment ant not a lot of reporting requirements. For private companies, board compensation is based upon a small or zero amount of cash, mostly stock, and the skills they are looking for often depend on a specific role they are missing or don’t have. In terms of reporting, you typically have an auditor looking at your results every few years based on what your investors want.”

She goes on: “On an ESOP board, the compensation is relatively small in cash, but you also get shares. On reporting, an ESOP is tax-exempt. While it’s an S-Corp, and you don’t pay taxes as an organization, you still need to report on valuation and annual audits. Then, for public companies, you tend to get a lot of stock and compensation and the skills they look for are much broader. The degree of involvement is lower, and it’s way more about governance. You have to file all the SEC reports, and so on.”

What are the Benefits of an ESOP?

Brown chimes on the benefits of being on an ESOP board: “It’s an exciting time; often similar to what goes on when a company prepares to go public. There is a massive change that has happened in the organization requiring new structures and oversight. When going from privately-held to a more multi-generational business and creating longevity and an environment where the whole owns it, you have a responsibility that those who manage it. You become more accountable to the whole.

She speaks from her own perspective: “For example, we spent a lot of time putting in traditional committees. At Archer Point, they had just created the ESOP and then wanted to bring in independent directors to operate on behalf of the trustees. We needed a financial report review, so we made an Audit Committee. There was then more rigor around succession planning, so we needed a Nominating and Governance Committee and a Compensation Committee.”

Going on, Brown says, “So, we made the charters, and had the experiences of coming together as a truly formalized entity of employee owners, C-Suite, and directors. The biggest excitement is that for anyone who’s interested in board or portfolio work, it’s a great way to be a part of something that’s truly forming instead of being slotted into a pre-existing structure.”

How are ESOP Boards Different?

Our guests then discussed the ways ESOPs felt different from other organizations they had been a part of and give some advice to those exploring ESOPs as an option for their own companies. Carps said that, “ESOPs take the life of the organization beyond the initial ownership group. You really have think about what your succession planning and personnel infrastructure has to look like to support this in the long-term.”

Brown adds, “I think the motivation behind why you’ve decided to become an ESOP is important. Motivation is about trying to ensure that multi-generational aspect.  The organization should be holding onto its heart. If it’s truly benevolent, you’re doing something helpful for employees in the long-term in addition to creating your exit.”

Feigin goes on, “As a newer board member, a lot of people go to the nonprofit. ESOPs are an interesting place to start. There’s this balance of comfort where everyone’s mostly aligned, and all of your stakeholders are internal. You are not dealing with external shareholders. There’s a certain simplicity about that. And there are a lot of ESOPs to choose from. It’s a great place to start for a new board member.”

Feigin discusses what she believes will be the biggest difference between boardrooms today and ten years from now: “I think our diversification model will evolve. It is becoming increasingly clear that as we increase diversity, those boards are more successful. It’s about more than just getting more women. We need more thoughtful people appointed to the board that better reflects the customer base.