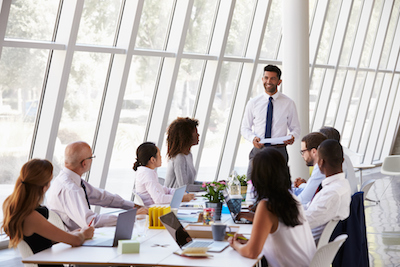 Diversity is one of the top issues for every board and their stakeholders and there is much agreement that it's highly important. There is plenty of disagreement related to the subject from everyone involved. There is some controversy about gender diversity and whether it really lends itself to increased revenue. That's one reason why there's not as much consistency around the level of importance that boards should give when discussing boardroom diversity.

Shareholders insist on diversity because they believe it will serve their interests better. The majority of women are in favor of gender diversity because it's part of their struggle for gender equality in the business world in general.

Men have long dominated the boardroom, and while they understand the benefits of diversity and the need to add more women to their boards, the combination of research, the #MeToo movement and changing times are causing many men to be afraid to say much of anything about boardroom diversity. No matter what their opinion is, they could be judged harshly for no other reason than that it comes from a male perspective.

In general, about 75% of board directors want to increase diversity, but there are many inconsistencies in their views on how to change it. Compared with 2017, fewer board directors believe that age, board tenure, international experience and socio-economic diversity have as much value as the hype they get.

The Impact of the #MeToo Movement for Men

The #MeToo movement made it clear just how many occurrences of sexual harassment for women have long gone on in workplaces across the country, and how many of those cases go unreported. In a survey called What Women Are Up Against at Work, six of 10 male managers reported that they felt discomfort when interacting with women at work and while mentoring them or during socializing. This is reflective of the fear in men that's been generated by the #MeToo campaign. Senior male leaders are 10 times more skeptical about having individual meetings with women at lower levels compared to having the same types of meetings with men. According to a January 2019 survey, four of five men said they were very concerned (55%) about false accusations of harassment and assault and 27% were somewhat concerned. A third of men were strongly concerned about pay inequity or inequitable treatment of women as it pertains to professional development or advancement, which tells us that men are far more greatly concerned about being falsely accused of harassment than about how women actually perform in the workplace. These issues have put men on high alert, despite the fact that false claims of harassment are rare, and most experiences of employment-related harassment never get reported.

According to PwC's 2019 Annual Directors' Survey, most directors reject the potential new trend toward mandates to include women on boards, including women directors. California was the first state to step outside the box and pass a gender diversity law in 2018. The law requires public companies that have their headquarters in the state to meet minimum thresholds for adding women to their boards as of 2019. This could be the start of a new trend across the nation. About 83% of board directors don't support laws that mandate gender diversity. Two-thirds, or 67% of board directors, are in favor of just allowing board directors to become naturally and organically more diverse over time.

Many board directors believe that the best way to diversify their boards is to set the stage for diversity at the board director recruitment stage. Generally, boards are interested in enhancing their board's culture and they want to retain the power to make choices as they see fit. The Annual Directors' Survey indicates board directors' motivations for pursuing diversity as reported are the following:

The biggest concern in letting shareholders or legislatures have a say in how they form their boards is the concern about losing collegiality. At the same time, there's also a general concern about the issue of too much collegiality preventing diverse opinions and perspectives from flowing in the boardroom. Perhaps what many groups and individuals are missing is how technology can help boards streamline the process for adding diversity to their boards. Nom Gov by Diligent Corporation is a digital solution for helping boards identify and locate board candidates that fill the necessary gaps in board composition, including gender and culture, and without discrimination in any area.

What Do Board Directors Support?

In their efforts to add diversity to their boards organically, 82% of boards are always interviewing a diverse slate of candidates. About 80% of companies felt that companies that use third-party search firms are in favor of asking the search firm to present at least half of their slate that represents some type of diversity. PwC's report also stated that 67% of directors felt that institutional investors should have any say in whether the board improved diversity. Only 17% of boards were in favor of more laws like California's Women on Boards. The whole nature of board structure comes from allowing boards to rely on best practices as a means for governing themselves. Perhaps it's not legislation or pressure from shareholders and institutional investors that stand to be the most effective way to encourage gender diversity and other types of diversity on boards. Just as boards work to develop a good board culture, getting to the point of having diverse boards will require men and women to listen to each other and develop a shared understanding of how they can work together for the betterment of the whole. In the 'What Women Are Up Against at Work' report, men shared that across age, industry and context for gender equality, it was important for all to have input and for all to listen. One respondent offered his opinion that board directors should approach discussions from a place of not knowing, being careful to use a tone that speaks of being interested in knowing more. At some point, such logical thinking could prevail.