What Is a Board of Trustees? 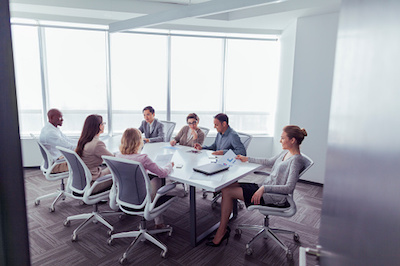 Boards of trustees are responsible for holding funds and other assets, including property "in trust." Boards of trustees have a fiduciary responsibility to protect all assets, which means that they must place the interests of the organization above their own. It also means that they must make decisions for the organization in the same way that an ordinary, prudent person would.

Banks, credit unions, colleges and universities often have boards of trustees. Art museums and other types of associations may have them as well.

What Is a Board of Trustees for a Mutual Savings Bank or Credit Union?

Mutual savings banks and credit unions have boards of trustees that govern their institutions. Boards of trustees for financial institutions are responsible for properly governing the institution and ensuring that the borrowers, depositors and members of the community's interests are protected. The board of trustees works to make safe investments of customers' money and to protect the security of their deposits. Trustees must make sure that they pay interest to their depositors according to their policies and make sure that customers can access their principal upon request.

What Is a Board of Trustees for a University or Other Educational Institution?

There are over 4,000 colleges and universities in the United States. Each higher educational institution boasts its own unique mission. The names of the governing bodies reflect the tradition, history and regional differences of each school. The term board of trustees is a widely used and accepted term to reflect the fact that reliable citizens govern the institution, rather than a governmental body or some other entity.

Colleges and universities may use any of the following terms to name their governing bodies:

What Is a Board of Trustees for a University Endowment?

An endowment is a sum of money that one party bequeaths to another party. University alumni sometimes donate large sums of money to their alma maters as an honorarium. Some universities appoint a special board of trustees to oversee and manage the investment of the endowment funds, so they grow and prosper. The university may use one or more institutional managers to manage the assets and appoint a board of trustees with fiduciary duties to oversee the endowment portfolio and approve investment decisions.

What Is a Board of Trustees by Definition?

Trustees are usually key individuals who are involved with the management or have a past history of involvement with the organization. Trustees may be appointed or elected.

Boards of trustees are being held accountable for such governance issues as compliance, data information security, safety issues in the workplace or on campuses, and many other high-level issues. Boards of trustees will benefit from using an electronic board management system to make sure that they're working efficiently while protecting the organization and themselves from unexpected liability. Trustees can take advantage of total Enterprise Governance Management with Diligent's Governance Cloud to manage all aspect of governance and compliance, including agendas, minutes and D&O evaluations, with no worries about cybersecurity matters.

What Is a Board of Trustees' Framework?

Trustees will find their duties and responsibilities outlined in state, federal or local laws, as well as in their organization's bylaws. Boards of trustees may range from three to 20 members. Much like other types of boards, boards of trustees may form subcommittees to help delegate duties or tasks. Committees do research and bring a summary of the committee's work back to the board, often with recommendations for board voting issues.