Making a Motion: The Ins and Outs of Group Actions 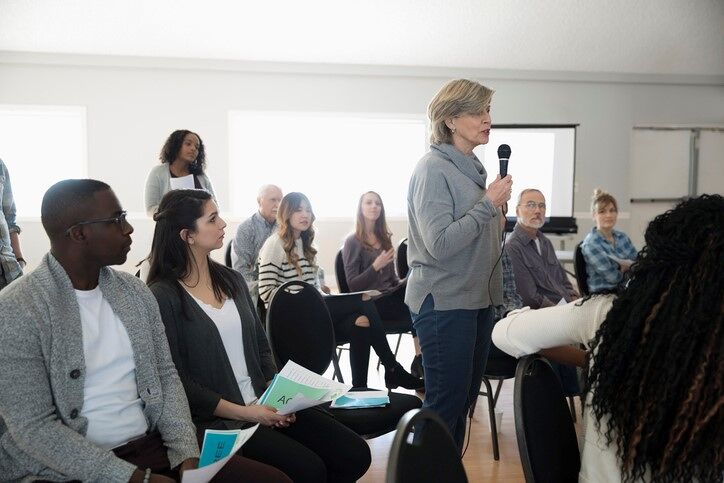 Most elected officials have been around long enough to know that if you want to make business happen, the key words are 'motions,' 'seconds,' 'discussion,' and'the big one''vote.'

But in the world of motions, there is no room for the haphazard or creative. There's a method to this, dictated by parliamentary procedure'the rules that guide the conduct of business.

Let's start this 'making a motion' refresher course by solidifying our understanding of what a motion is and what we're doing by launching one onto the floor during a meeting.

According to Robert's Rules of Order, a motion is a proposal that a council or governing body take a specific action. And within the larger concept of a motion, we have subcategories: main motions and secondary motions.

Main motions propose substantive action. For example, a main motion might propose that the city's parks and recreation department refurbish outdoor pavilions at four local parks, or that funds be allocated for repaving Main Street. Any proposal related to the substantive business of your municipality would be defined as a main motion.

Secondary motions propose procedural action. This motion type involves the progress of a meeting rather than the substance. For example, a motion to limit debate, table a main motion, refer a main motion to a committee, or adjourn'all of these are what Robert's Rules calls secondary motions. They're not related to the content of the city's business but to how the business is taking place as you meet.
These go hand in hand: Main motions and secondary motions combine to maintain order and also help you accomplish the work you've been elected to do.

Getting Things Moving'One Motion at a Time

Three words are all you need: 'I move that.' Any member of the council with a proposal for the group to consider'whether a main or secondary motion'need only by recognized by the chairperson in order to get things rolling. And once recognition has been granted, this simple phrase''I move that . . . .' alerts the rest of the council that you're proposing some type of substantive or procedural action.

For main motions, an additional rule of motion-making applies: A main motion can be made only when no other main motion is being considered by the group. So, in the middle of the parks and rec pavilion motion, no member of the board can interrupt and say, 'I move that funds be allocated for repaving Main Street.' Stay on topic until one main motion is wrapped up.

But, part B of this one-thing-at-a-time rule does allow for secondary motions to pause the main-motion process, if needed. Using the above example again, a member could propose a delay of the parks and rec discussion by suggesting, 'I move that we table the main motion regarding the parks pavilion refurbishing until there the city's annual budget has been approved.' Procedural motions apply to substantive motions.

It Takes Two'What Are Seconds?

A motion goes nowhere without some backup'referred to in parliamentary procedure as a second. A second is an indication by another member that a motion which has been presented is worthy of the council's time. A second is not a sign of agreement or support. It is only an indication that a least two people think a topic is worth discussion. Parliamentary procedure says that one person doesn't get to dictate how the group spends it time.

For a motion (whether procedural or substantive) to be discussed or voted on, another member must speak up and 'second' the motion. Then it can be considered.

The How: A Step-by-Step Guide

Making a motion can be summarized as a six-step process.

1. Be Recognized. The first step in making a motion is to seek recognition by the chairperson to speak. Any member of the local governing board may speak up and say, 'Mr./Madam President?' And the chairperson simply responds, 'The Chair recognizes Mr./Ms. Member.'

2. Make a Motion. After recognition, the member of the board may propose the motion by saying, 'I move that funds be allocated for repaving Main Street.'

3. Second the Motion. A different member of the board needs to speak up and offer a second to this proposed motion. And all this second member needs to say is, 'Second.' (One added note on seconds: The second is impromptu'meaning, the chair doesn't have to invite this step by asking, 'Is there a second?' And the member making the second does not have to follow a separate step 1 and be recognized.)

4. Repeat the Motion. Once a second has been given, the chairperson repeats the motion back to the group, officially stating by this repetition that the idea as proposed is now available for consideration by the group. The chairperson simply says, 'It has been moved and seconded that funds be allocated for repaving Main Street.'

5. Discuss the Motion. The head of the board next invites debate about this motion by asking, 'Is there any discussion?' Consideration of a motion could include various members offering their ideas and opinions, or it might include referral of the proposal to a committee, or postponed consideration until a later meeting.

6. Vote on the Motion. And as a final step after discussion, the group needs to take some action to dispose of the motion. The chairperson should lead by saying, 'If there is no further discussion, we will take a vote. All those in favor of that allocating funds for repaving Main Street say, 'aye.' All those opposed say, 'no.'' And then the chairperson should state the results of that vote, by saying, for example, 'The 'ayes' have it and the motion is adopted. Funds will be allocated for the repaving of Main Street.'

Sarah E. Merkle
Sarah E. Merkle is one of only five lawyers in the world to have earned the two highest parliamentarian certifications. For fifteen years, she has helped local, regional, and national clients make decisions that honor the law and efficiently move business forward without disruption. Sarah serves as the blog editor and primary contributor for The Law of Order: A Resource on Parliamentary Procedure & the Law. She knows that parliamentary procedure is about more than taking minutes or understanding the latest edition of Robert's Rules of Order. She views meeting rules as a tool to help organizations'small and large'achieve their goals and navigate the sometimes crazy world of governance. And as a former educator, she knows how to make the tricky parts understandable. Sarah works at Civility, LLC. She can be reached at [email protected]. Read her other posts at https://civility.co/blog/.