What Is Your Entity Management Solution Doing About Brexit? 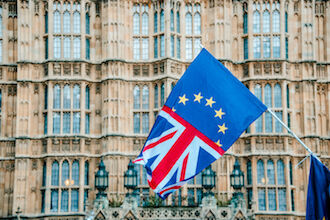 Even now, more than two years after Article 50 was first triggered by the UK government and the formal negotiation period for “Brexit”—the British exit from the European Union (EU)—began, companies operating in both jurisdictions are none the wiser about what the future of business will look like for the area.

A withdrawal agreement was agreed between the two negotiating parties, but the UK parliament has voted multiple times against its contents, the main issue being what’s called the “Irish backstop”—that is, how to handle the border between the Republic of Ireland (EU) and Northern Ireland (UK) once the island is no longer part of the bloc.

We’ve watched the original exit date come and go, and are now into the second extension period. This time it’s serious, and the UK has until Halloween (31 October 2019) to agree on its approach—not an easy task considering the myriad strongly held beliefs and divisions in the British parliament right now.

And business in Britain is fed up, to say the least. Big-name corporations have announced their intention to move operations from the UK to the mainland or to downsize UK presence as a result of Brexit. Aviva and Barclays are moving to Dublin; Bank of America Merrill Lynch is off to Paris after merging its UK and Irish subsidiaries; Panasonic and Sony will base European operations in Amsterdam; and Dyson (whose founder is pro-Brexit) will move its HQ to Singapore. Car manufacturers Honda, Ford and Nissan are either closing or downsizing; all P&O ships operating in the English Channel will fly the Cypriot flag. Even the quintessentially British brands of Jaguar Land Rover and Rolls Royce are making post-Brexit moves, just in case a no-deal Brexit is the end game.

Most of these moves have been blamed publicly on Brexit uncertainty, with businesses no longer willing or able to wait for the post-exit environment to become clear. Compliance and business operations need risk management, and Brexit planning is becoming less a case of “wait and see” and more a case of hedging bets.

Brexit uncertainty makes the day-to-day lives of those looking after entity management evermore difficult. How can you plan for compliance if you don’t know what regulation will look like in the second half of the year?

Some regulations are unlikely to change; for example, antibribery and corruption prevention laws have generally come from outside the EU or from the OECD. Others, including competition law and much of financial services regulation (including MiFID, AIFMD and the AML Directives), are firmly based in EU directives, which places huge question marks over their ongoing applicability. Certainly many of the financial services firms that have moved to Dublin, Amsterdam or Frankfurt have done so to maintain access to passporting rights.

While EU directives, once handed down, must go through the process of localization—that is, being interpreted and enacted into the local laws of each of the 27-member states—there is a general rule of law on the continent. The uncertainty over what this means for British and European businesses who want to move goods and services and employees across borders post-Brexit makes the work of entity management almost impossible.

“The UK is way ahead of the field in most areas of corporate governance, and the UK Corporate Governance Code has helped to shape governance around the globe. The fact that the UK has long been at the forefront of international good practice should stand us in good stead, but we cannot afford to be complacent,” wrote Peter Swabey, ICSA Policy and Research Director, in the early days of negotiations.

Things changed. Professional services provider TMF Group took a Brexit snapshot at the end of 2018 and found 77% of business leaders were still taking a “business as usual” approach, waiting for the details of Brexit to be known before finalizing their response plan—despite three-quarters of respondents saying they believe Brexit will have an impact on their business.

Wait and see is no longer viable; planning for the worst-case scenario is surely now on the minds of all businesses with entity management requirements in both the UK and the EU.

After the fun and games in British parliament over February and March showing we’re no clearer or nearer a final outcome, and with an extension to the deadline now in place, company secretaries and general counsels in the region will be iterating on their Brexit plan. One thing is certain: Electronic filing will change post-Brexit, but we don’t yet know what that will look like.

For example, we’re working to:

Something as simple as the jurisdiction named on a form can result in filings getting rejected, so we believe it’s important to get ahead of these things. We’re keeping an eye on discussions in parliament and are ready to jump into quick action as and when compliance requirements become more clear: Deal or no deal, customs union or revoking Article 50, whatever the next few months bring, our entity management software will be ready for it.

This is, of course, in addition to our entity management software suite and its array of solutions for the in-house compliance, legal operations and corporate secretarial teams. Schedule a demo to see how our entity management software can help keep you compliant—even as Brexit planning and continued uncertainty makes forward planning a challenge.

Experienced journalist Lauren McMenemy has been writing about compliance and governance for several years, and has covered finance, professional services, healthcare, technology, energy and entertainment.