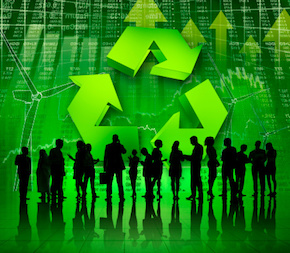 The terms corporate governance and corporate social responsibility sound similar, but there is a very important difference between them. Both processes are important for corporations, industries and society at large. Both can have a positive or a negative impact on corporations and societies.

Corporate culture is becoming a hot topic on Wall Street, and for good reason. Culture has a major impact on employee retention. Corporate identity and image say a lot about what a corporation values and thus drastically affect its branding. The path to corporate profitability often rests with corporate social responsibility, which entails paying more attention to the issues that matter most to employees, customers and whole communities.

What Is Corporate Governance?

Corporations and industries differ in many ways. Size, assets, ownership and other issues make it impossible to enact exact rules and laws for every situation that corporations face. Corporate best practices evolved as a standard of basic principles for corporations to strive for to demonstrate that they're governing themselves well, and that they're operating with honesty, integrity and accountability.

What Is Corporate Social Responsibility?

If you mention any major headline, you're bound to find a host of opinions on both sides of the issue. Major headlines often have an impact on employees in one or more ways. To mention a few, sexual harassment in the workplace, diversity, global and political issues, environmental issues, natural disasters, human rights, and data privacy and protection are big societal issues.

Several incidents have brought workplace harassment and inequality onto the agenda items in boardrooms across the nation. Susan Fowler, a software engineer for Uber, blew the whistle on sexual harassment at the company with an essay that ousted the CEO. The Me Too movement started in 2006 and went viral after allegations of sexual harassment against film producer Harvey Weinstein surfaced in 2017. Supreme Court candidate Brett Kavanaugh is under fire, as several victims have alleged that he committed sexual assault against them when he was young. The Pew Research Center did a survey this year that showed that employees feel that 50% of men get away with sexual harassment in the workplace. About 46% of employees feel that society has a tendency not to believe female accusers.

These incidents have prompted corporations to have zero tolerance policies for sexual harassment and enhance their internal reporting policies. The issue is also motivating corporations to review whether they afford women equal opportunities for employment.

The headlines have also given fair attention to diversity beyond gender lines. Corporations have responded by giving a larger voice to their employees regardless of culture, language, age, sexual orientation, disability and background. This effort demonstrates that the corporation values a wide range of identities and perspectives.

CEOs of successful enterprises have shown that they aren't afraid to take a stance on national issues that affect their employees. The CEOs of Apple and Facebook took a public stance on the Trump immigration ban. Corporations have also taken public stances on issues such as public lands legislation, transgender people in the military and white supremacy. NPR and other media reported that CEOs pressured the President with concerns about withdrawing from the Paris Agreement.

Recent times show a trend toward corporations taking more focused action on social policies where they feel they can make a positive impact. They're devoting more resources toward proactive initiatives.

Natural disasters have had a major impact on corporations. As a result, some corporations are shifting their efforts away from recovery and more toward prevention, mitigation and climate resilience. To that end, corporations are relying on innovative technology and re-inventing business models with the goal of managing critical and unpredictable changes related to the climate.

Consumer expectations for quality products have increased in recent years, forcing corporations to set higher standards for their suppliers. Consumers have also demonstrated loyalty to corporations that commit to human rights and environmental concerns within global supply chains. In addition to assessing quality products and value-based pricing, consumers are devoted to environmental performance such as water conservation and human rights issues such as human trafficking.

Date breaches have also been a social concern, and that trend shows no indication of slowing down. Corporate boards still need to prioritize privacy and data protection and pursue it as heavily as when media reports of date breaches were new. Corporations are putting more of their financial and human resources into protecting personally identifiable information, as they should.

Diligent Corporation recognizes the complexity and weight of corporate board decisions. The duties and responsibilities of boards motivated Diligent to create Governance Cloud, a suite of software solutions that support good corporate governance, which gives them the time and resources to focus on corporate social responsibility. The tools within Governance Cloud provide the high level of security that boards need for secure communications, board evaluations, board books and minutes.

The digital tools that comprise Governance Cloud motivate board directors to ask better questions to gain insight about their normal board duties, as well as to think beyond that and factor in how the corporation positively affects the greater community, the nation and the world. Only Diligent offers a fully integrated suite of software solutions that supports corporate governance and corporate social responsibility.