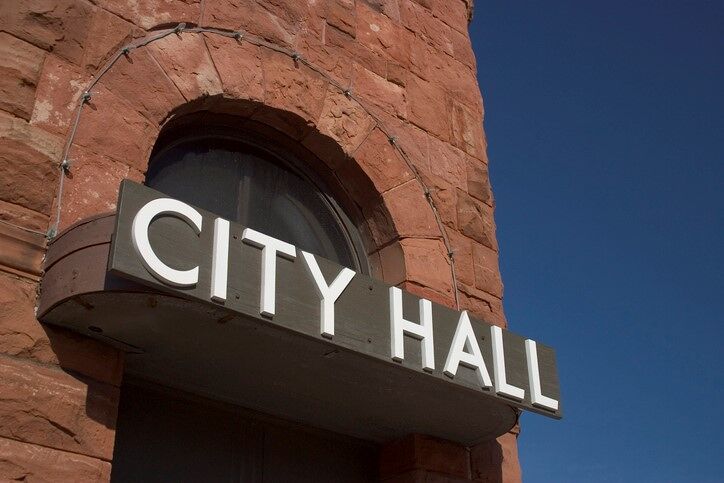 A City Council, Water Department or Planning Commission makes countless decisions through open meetings of the councilors. Any episode of Parks and Recreation attests to how easily an earnest Leslie Knope can lose control of the room to impassioned self-expression by a Jeremy Jamm. Can meetings stay on task while remaining representative? The answer is a resounding “yes.” Running an effective municipal meeting is an acquired skill. Follow these tips to harness the energy and ideas in the room to get business done.

Two principles steer the ship at all phases of the meeting preparation, execution and follow-up. The first: There shall be no surprises. The second: Chaotic discussions cannot waylay the business of the meeting.  Honoring these rules requires considerable planning in advance of the meeting: both posting ground rules (I) and making the agenda available (II).

Be sure that the ground rules of the meeting are known to all, not only to the chairperson. Remember that some of the public participants are first-time visitors, and some may have never participated in a professional meeting before. They will not necessarily assume many customs that seem obvious to you.  You will not need to repeat the work of clarifying your procedural policies, but devote a day to it now if you have never had explicit ground rules.

Some states require particular published rules to be followed – e.g., the most recent edition of Robert’s Rules of Order Newly Revised. If your state gives you leeway, start with any version of Robert’s Rules of Order and make only the adjustments that you deem necessary. To compare representative rules of procedures used by code cities, first-class cities, second-class cities and counties, see “Sample Rules of Procedure”.

Certain fine points of parliamentary procedure determine how permissive or restrictive your meeting will be. Merely informational meetings could have laxer rules than the more typical assembly charged with making decisions, solving problems, planning programs and evaluating existing initiatives. Public hearings allow extensive discussion by anyone with an interest in speaking; the First Amendment protects the freedom of speech at public hearings. Council meetings, by contrast, must get things done; they can limit speech if state statutes allow. We strongly recommend stronger limits to keep business on track in a setting that is notoriously prone to outbursts.  Post publicly, before the meeting and at the meeting, these rules:

Items to Include in Parliamentary Procedure for Focused Municipal Meetings:

Once you have determined the exact rules to govern your meetings, put them on the website and have them posted visibly at the meeting.

Typically, as in Iowa, State Code requires that notice of a meeting and its agenda be posted publicly. This seemingly simple task actually involves several steps:

Up to five days before the meeting. The chair should invite submission of agenda items and collect them.

Four days before the meeting. While many city councils have the mayor or the chair create the agenda, some hold a working session of council members and staff to promote communication and instill confidence.

Whoever composes the agenda must decide who is responsible for each item. Do not leave this to chance!  Experienced chairs encourage the most broad-based participation possible.  Committee reports and ad hoc project updates should be assigned to different people; this small act increases attendance, participation and ownership. Contact presenters directly to ensure that they know they are expected to contribute something specific.

Three days before the meeting. Post the agenda publicly. We do not recommend subjecting the agenda itself to a vote of approval; it sends the signal that limits and structure are negotiable.

Council members should know how to communicate with the mayor or other officials prior to the meeting to clarify items on the agenda. It is imperative that such contact not violate sunshine laws by brokering private deals or shoring up votes.

Most meetings begin with reviewing the minutes of the last meeting and hearing committee reports. It saves time to vote only once on all of these matters, compressed into what is called a “consent agenda.”

You will be grateful at this point that matters of parliamentary procedure have been determined and posted. A chair who simply enforces those rules will keep conversation on track so that needed votes are taken. You have already decided, for example, if any one person may speak only twice (or, say, for only five minutes) on a given matter. If so, that creates an impersonal way to rein in someone who would like to talk more.

A good chair has an instinct for asking that comments be converted into motions. The chair should then restate each motion, clearing up any vague wording. In the discussion, the person who made the motion should speak first. Some chairs alternate pro and con comments. The chair is also free to call directly on council members who may have special knowledge on the matter and who are not as talkative. Discussion ceases when a council member “calls the question,” at which point a vote is taken.

In closing the meeting, BoardSource Senior Governance Consultant Bruce Lesley recommends that the chair summarize discussions and actions taken. The closing should also be positive, with thanks extended to volunteers for their work. The format for any communications after the meetings (e.g., email) can be specified. Comments could be directed to a single public online platform.

State Code typically requires official minutes to be posted publicly within a specified time frame. Many city councils now also post video or sound recordings. The press may contact council members or members of the public who spoke in the meeting about votes that were taken or about discussions that remain to be voted on at the next meeting. Council members must remember that when they speak to the press, they are not representing the council as a whole.

If you follow all of these steps, you will be better able to run outstanding municipal meetings that invite needed input without getting sidetracked in emotional, or even hostile, verbal conflicts. Without imposing tyranny, it prevents eruption into the shouting matches that can undermine public confidence. With good governance, even city councils can get the job done.