Where Is the U.S. Economy Heading? We Asked Corporate Directors

Diligent Institute and Corporate Board Member are teaming up on a new, quarterly pulse survey to track corporate director confidence in the economy and sentiments on other topical matters.

In a year of constant change and uncertainty, are corporate directors planning for election outcomes? Are they optimistic about economic recovery and growth? Diligent Institute and Corporate Board member explored 121 U.S. public company directors' sentiments surrounding the upcoming presidential election, as well as director confidence in the economy now and in the future.

Respondents were decidedly split about which U.S. presidential candidate would be better for their business. Despite the fact that Donald Trump is typically described as the default 'pro-business candidate' due to his party affiliation as a Republican and his background as a business mogul, only about half of the respondents (49%) indicated that he would be best for their company. Trailing slightly behind at 47% was Former Vice President Joe Biden, with a much smaller 4% indicating a third-party candidate. 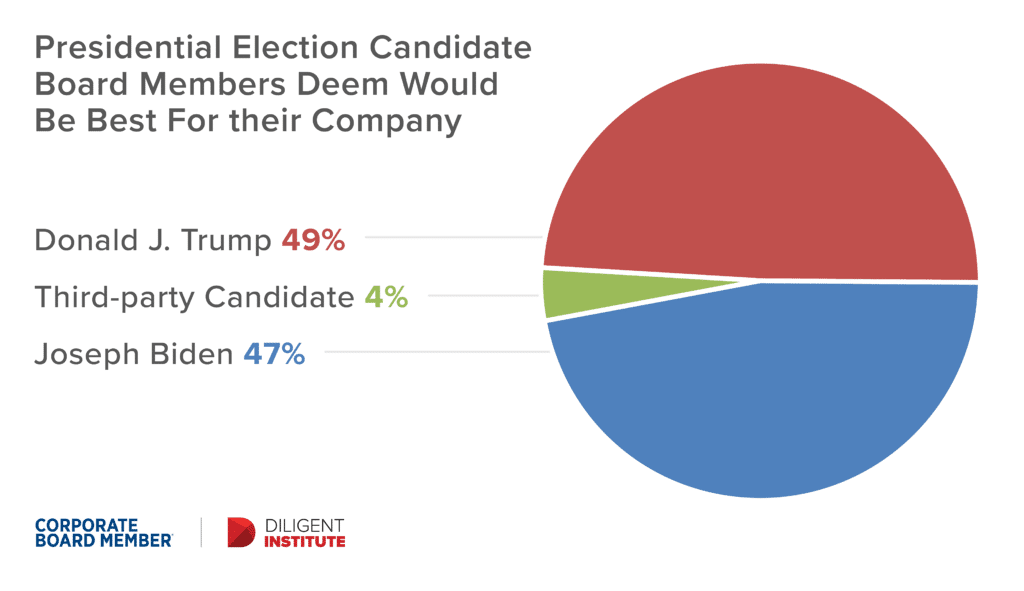 This divide indicates that director confidence in the Republican party, namely in President Trump, to be the de-facto 'better for business' option could be waning. Although directors selected Trump the most frequently, he failed to secure a majority in our sample and beat out Biden by a slim margin given what has been perceived by many corporate leaders as a significant swing to the left in many of his policy goals. It should be noted also that this survey was conducted before the official announcement of the president's COVID-19 diagnosis.

Directors are also engaging in surprisingly little scenario-planning surrounding election results. In fact, over 80% of respondents indicated that they had no board-level plan at all where Trump or Biden contested the results. Meanwhile, over 60% had no plans for civic unrest following the election, a possible election repercussion given the highly charged and hyper-partisan atmosphere that has increasingly dominated the political realm since 2016. Still, over 40% of respondents indicated that they have at least discussed what a Biden or Trump win would mean for their businesses, while 36% have discussed what they would do in the face of civic unrest.

These results surrounding scenario planning align largely with what Diligent Institute has gleaned from extensive conversations with directors: Despite the tense and turbulent political environment, board members are confident in their ability to guide their companies through either election outcome, and that neither administration will significantly alter most companies' big-picture outlooks. However, political uncertainty and the repercussions of the election are definitely playing into directors' confidence in general business conditions, as evidenced by these issues being discussed by the board.

Corporate Directors Are Cautiously Optimistic About the Economy and Future Conditions

The survey shows director confidence in the economy at 5.2 on a 10-point scale, which is 9% lower than the 5.7/10 result indicated by the CEO Confidence Index, a similar pulse survey of CEOs conducted by Chief Executive. Looking ahead to 12 months from now, directors' economic outlook is a bit brighter at 6.6/10, which still trails the same measure in the CEO Confidence Index (6.9/10). Looking at growth forecasts, about 60% of surveyed directors expect profits and revenues to increase in the next year. Meanwhile, a majority (55%) predict increases in cash reserves and 53% predict flat debt.

Many directors indicated that their relative confidence in the future economy hinged on the widespread distribution of a viable COVID-19 vaccination. Time, and the Q4 DCI survey, will tell whether this cautious optimism shifts as vaccine development progresses and the timeline to viable distribution continues to lengthen. Other directors cited political turmoil as a reason why their confidence in economic conditions was relatively low. In our Q4 DCI survey, which will take place after the election, we will see if these perceptions too have shifted.

2020 has ensured that in many ways, directors can only be confident in the fact that the next crisis is always around the corner, and that it might not wait for the current crisis to end. In particular, the confluence of COVID-19 and related effects as well as the upcoming U.S. presidential election have had an impact on director confidence in long-term strategic planning and economic forecasting.

The DCI aims to keep a pulse on board member's outlooks and insights into these and other key topical issues related to business strategy moving forward. Published quarterly, we will track director confidence in the economy over time as well as gain valuable insights into directors' sentiments regarding the most salient issues of the moment: politics, the pandemic and what comes after.